A Father’s Experiences in the NICU – Part 3 of 3 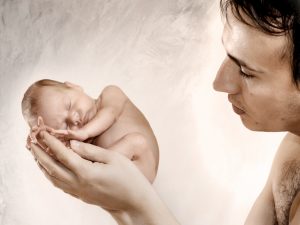 Part 3 of 3 – Our final post reviews a synthesis paper of 24 international studies (2005-2013 – 12 countries, n-232) looking at father’s experiences in the NICU. Included are father’s quotes from these studies. Hearing their personal thoughts and voice can have the greatest impact on our practice and our hearts.
The five key concepts found were:
Proximity –Fathers described barriers to being close to their infant as both the acuity of their infant and fear of equipment. “It was like, you rather not touch him ‘cause you thought then I’ll rip off this or that tube or something like that” (Lundqvist, Westas, & Hallstrom, 2007, p. 494). The staff also influenced a father’s closeness to their infant. “If they [the nurses] hadn’t asked me to [touch the baby], I wouldn’t have done it” (Feeley et al., 2013, p. 77). “Well I’m absolutely certain that if I hadn’t held her, then I am convinced that I would have been further out on the sideline and just standing there, looking upon my wife and baby and I don’t think that would be good for a father, (Helth & Jarden, 2013, p. 118). “The first time I held him skin to skin, it was really like wow! (Feeley, Sherrard, Waitzer, & Boisvert, 2013, p.75).
Parental autonomy – Recognizing that fathers have a right to make decisions, care for and hold their infant is what fatherhood embodies. The NICU environment can render parents unable to parent, which adds to their own fears and hesitancy in providing care. The feeling of having to ask permission to……implies dependence. “We still weren’t sure whether you were allowed to pick her up” (Swift & Scholten, 2009, p. 253). “Sometimes the staff gave me the feeling that the infant was not ours, we just have her on loan” (Lindberg, Axelsson, & Ohrling, 2007, p. 145).
Vulnerability – Some fathers shared feelings with regard to their own abilities, “In the beginning I was afraid of touching him, but after the first time it became less scary….; (Fegran, Helseth, & Fager- moen, 2008, p. 813), Others felt vulnerable due to how others cared for their infants, “I saw them trying to rescue my baby. I really did not want to watch but I also was afraid I would never have a chance to see him again” (Lee, Lin, Huang, Hsu, & Bartlett, 2009, p. 515). Sometimes, fathers reported internal struggles. Fathers felt scared but did not want to be perceived as vulnerable but rather strong.
Communication – The concept of communication involved information, interpersonal skills, and peer support. Fathers described that the right amount of information given in the right way had an impact on the experiences in the NICU. The accuracy, availability, type and amount of information communicated were reported in both positive and negative terms, “I found that often we were told different things by different people and you don’t really need to know the exact science behind it . . . just need to know in layman’s terms” (Hollywood & Hollywood, 2011, p. 36). “The trouble is when you are working, driving 2 hours a day … you don’t have a lot of time to read a pile of information” (Ichijima, Kirk, & Hornblow, 2011, p. 212). Communication, interpersonal skills of staff and poor communication between staff also influenced experiences. “Sometimes we had to inform the staff about what had been decided . . . (Blomqvist, Rubertsson, Kylberg, Joreskog, & Nyqvist, 2012, p. 1992). Fathers also felt the need to interact with other parents. “Sometimes you want to talk to someone who’s been there, who’s experiencing the exact same thing” (Smith, Steelfisher, Salhi, & Shen, 2012, p. 349).
Exclusion and isolation – Fathers felt overlooked during conversations. The needs of the mother took priority. Some fathers wanted more opportunities to be involved and felt a sense of “being out on the sideline” (Helth & Jarden, 2013, p. 118) and “not really part of it” (Leonard & Mayers, 2008, p. 22). The sense of exclusion came from a majority female environment as illustrated by one father feeling like “a rooster in a hen yard” (Lundqvist et al., 2007, p. 493). Studies showed that the needs of fathers was overshadowed by the needs of the mothers, “If the two of us were sitting there and someone came up to us, it would always start with, ‘OK Mom, now it’s time ….’ There was never really, ‘Ok Dad, now it’s your turn’ ” (Hollywood & Hollywood, 2011, p. 37). Being seen as an equal parent was important to inclusion as experiences of exclusion caused stress and isolation

Practice Implications- The quality and level of fathers’ interactions with their infants are vital to child behavioral development. We are ideally positioned to facilitate and promote positive paternal/infant relationships.
· Can we offer equal time and involvement to both mother and father?
· Can our communications include both parents and not just focused on mothers?
· Can we offer opportunities for more physical contact for fathers? (cares, skin to skin)?

How will we change or enhance our practice?